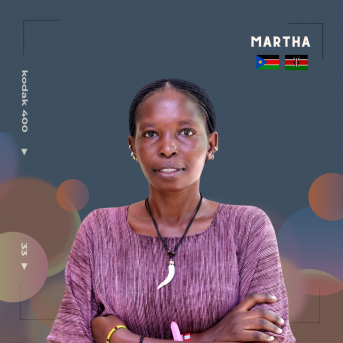 Hello! My name is Martha Nakiru, and I am a South Sudanese by nationality, currently living in Kenya at Kakuma refugee camp. I live together with my elder brother Amos. I came to Kakuma with my mother and brother when a conflict started between South Sudan and Sudan, and I was only one year old. When we arrived in Kenya, we were registered by UNHCR as refugees, placed in a camp, and issued a ration card.

After that, I enrolled in primary school in the refugee camp and later moved to Angelina Jolie's primary boarding school.

Later on, I graduated from Morneau Shapel Secondary School. My family has gone through many difficulties, which is why I wanted to succeed in my life through education - to give my mother a better life, eventually outside of the refugee camp. Unfortunately, she passed away while I was doing my final exams in 2018. I was so devastated, but I never lost hope in my life. I realized that my elder brother needed me, and I could not just quit on him.

I started to follow my dream by enrolling in media training which equipped me with the skills of being a photographer lady. Most girls don't like it because of all responsibilities required: camera settings, choosing the ground, and most importantly, carrying heavy equipment. For me, that's what I like most about being a photographer lady. I love to be challenged and do things that people think only men can do. I want to represent my people in Kenya and mostly inspire girls through my actions: to chase their dreams and not end up somewhere behind the office desk unless it's their dream.

MARTHA: This is where I live

Martha lives in the Kakuma refugee camp in Kenya together with her brother.

This is Martha, a young woman from South Sudan. Martha had to leave her home country because of the war between South Sudan and Sudan and is now living in a refugee camp in Kenya.