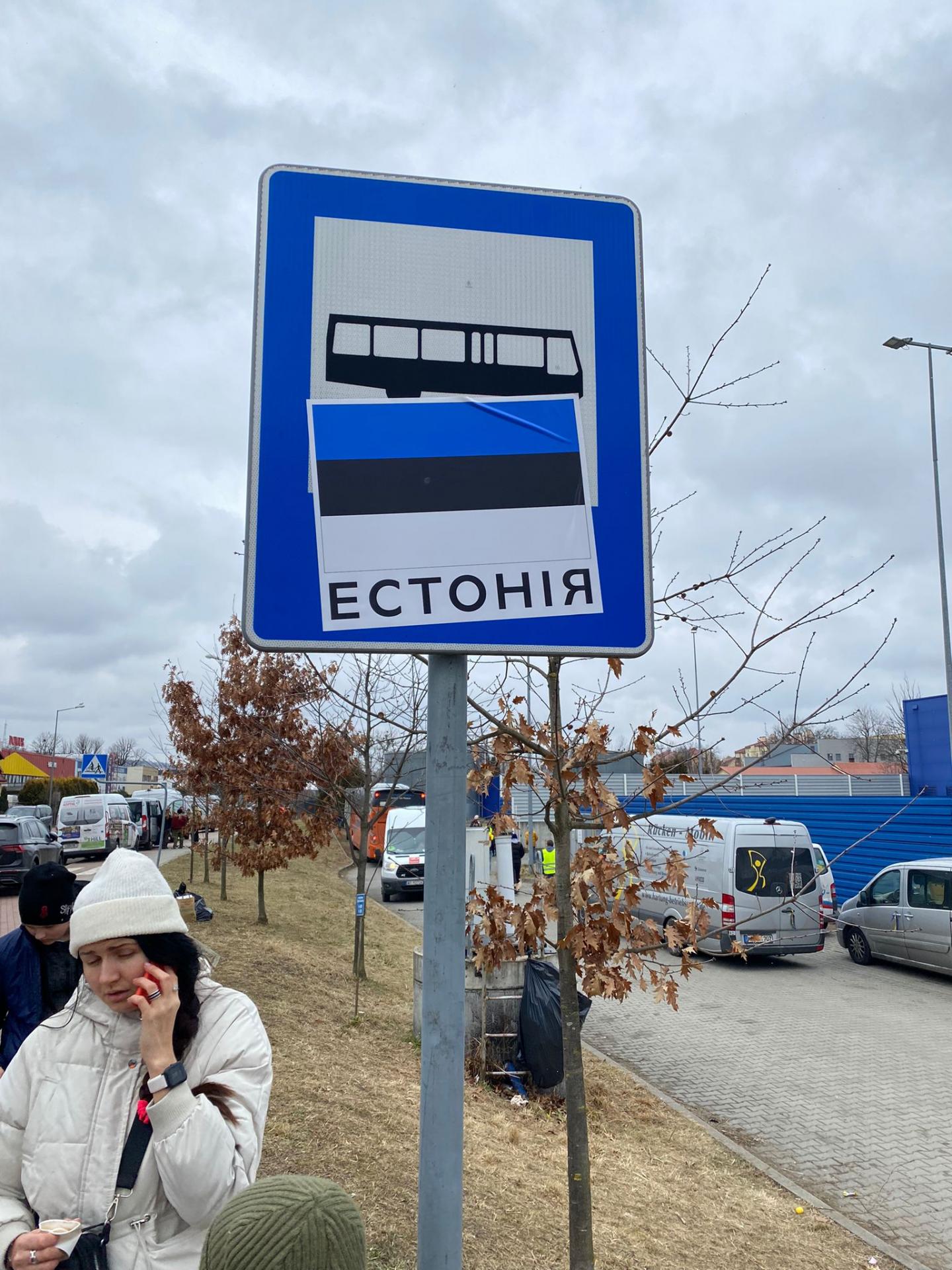 HOW WE ORGANIZE(D): EVACUATION TRIPS

Yesterday, the last evacuation buses organized by the Estonian Refugee Council left from Tallinn to Poland. It’s time to publish some numbers and write about what the crisis management that has been going on for more than a month looked like on the evacuation side. We began need-based evacuations from Medyka on February 25, when there was chaos at the border and opportunities to reach bigger cities were almost non-existent. We filled this gap through humanitarian intervention and brought safely to Estonia mainly those refugees who had family members and friends waiting for them here. More than a month later, Poland's transport systems are better in place and regular routes (LuxExpress, Ecolines, Flixbus) between Poland and Estonia are also operating. We used for the evacuation: 535 000 euros.

If necessary, we are ready to react immediately and start evacuating again.

Between February 25 and April 1: 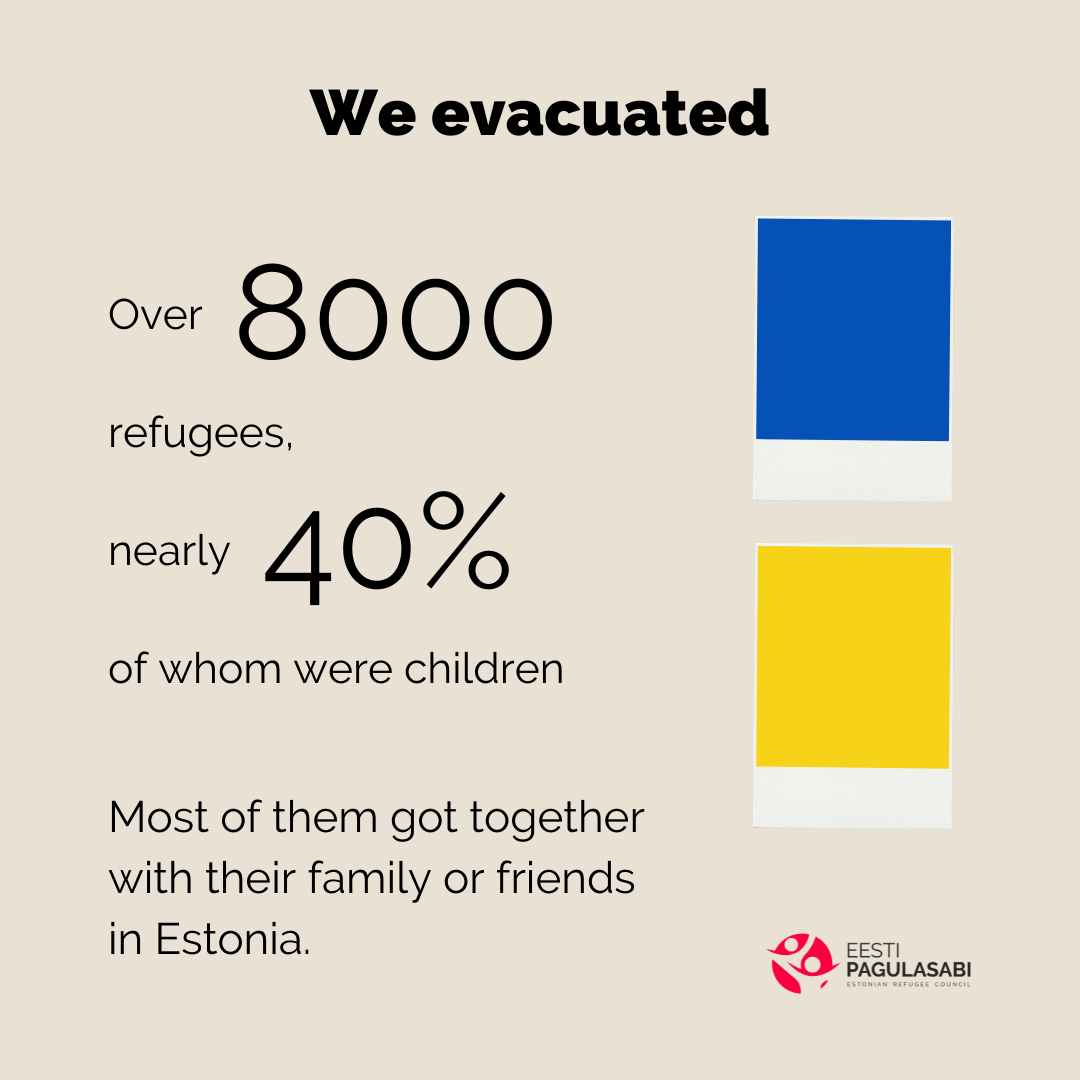 In addition to refugees, pets were also evacuated. For example, two cats and 14 dogs arrived in Estonia last week. 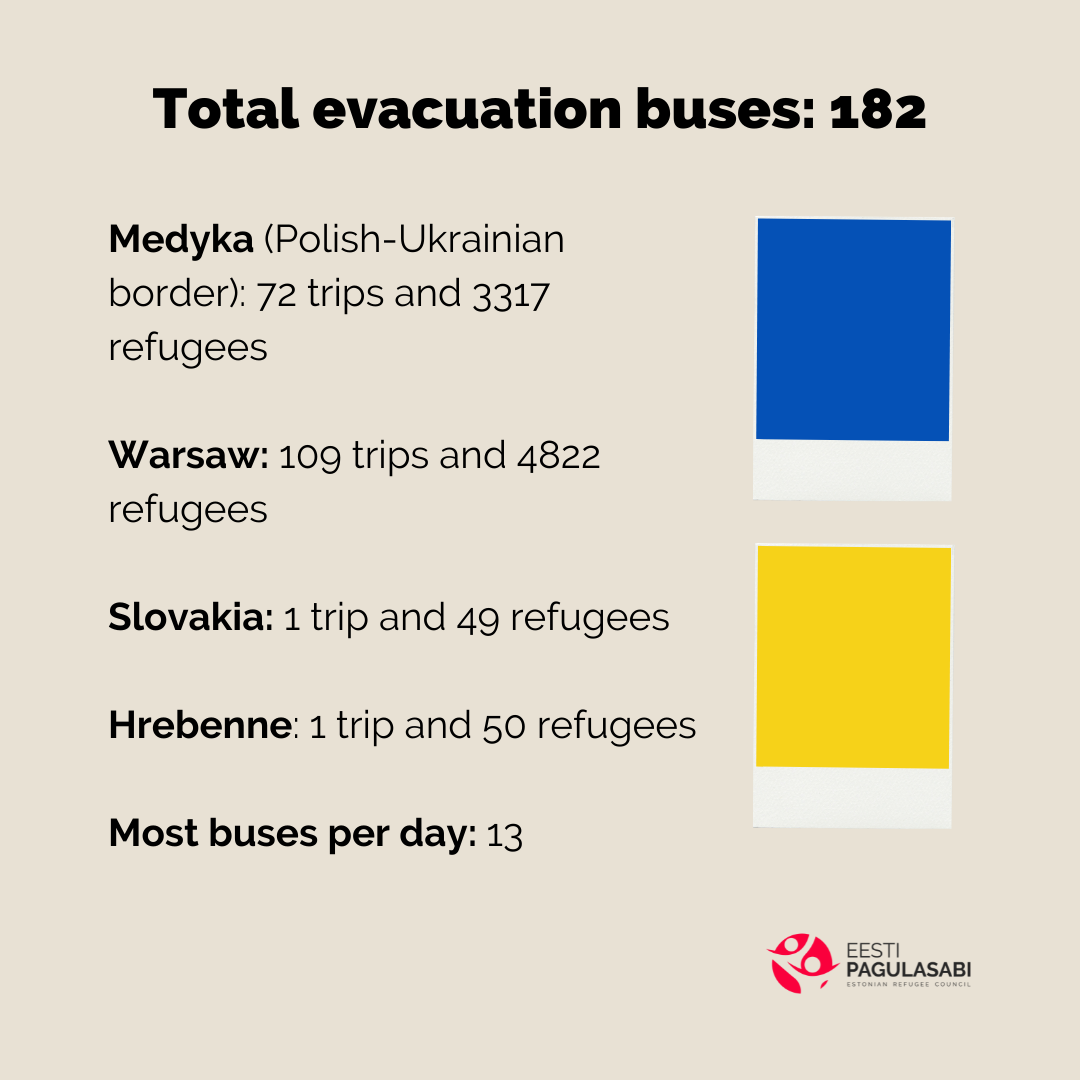 In total, we were assisted by: 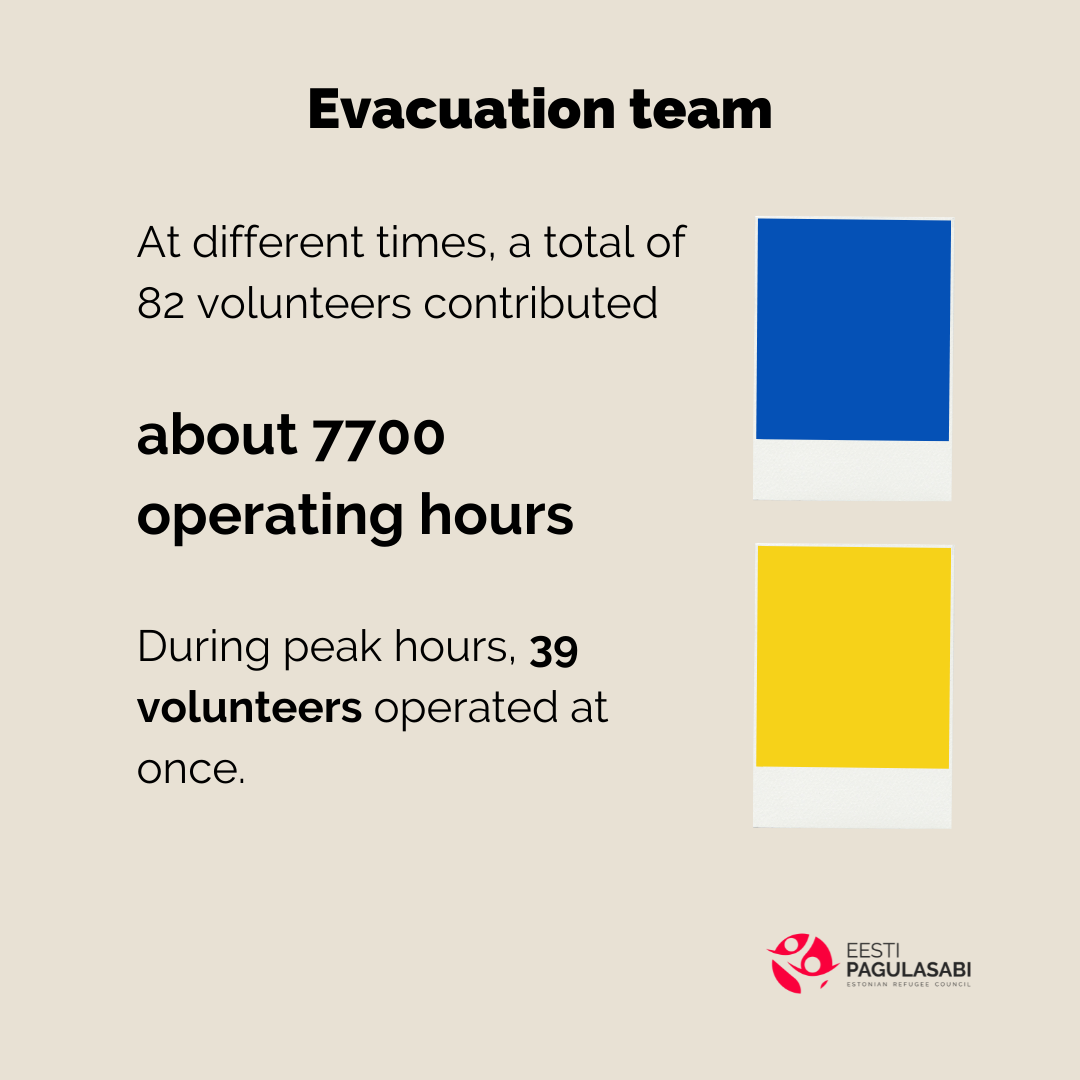 There were a total of 152 trips with travel companions. 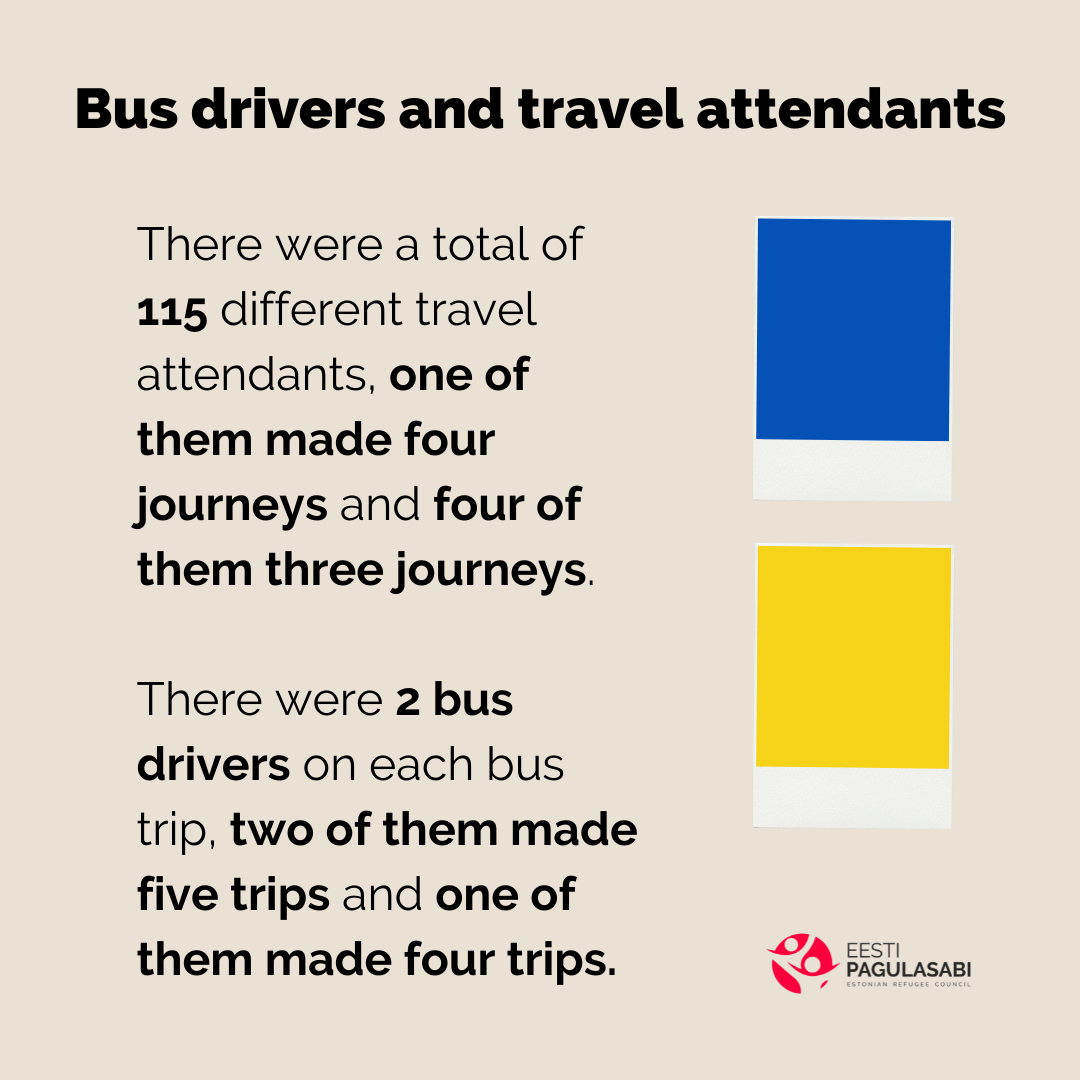 At the Tallinn and Tartu base, buses were assembled with the help of:

We packed on the buses: 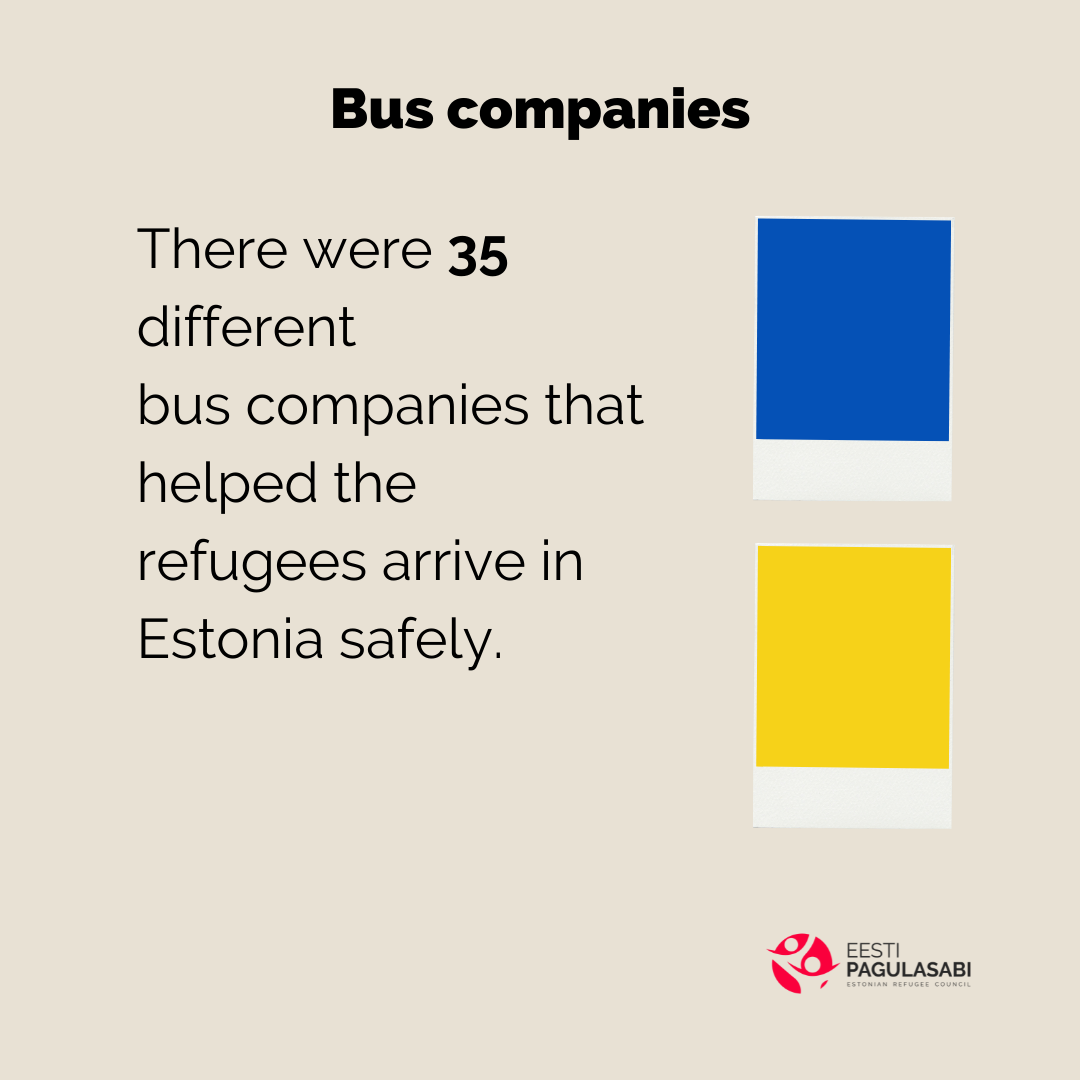 And all the volunteers - no one can praise you enough. Thank you all! 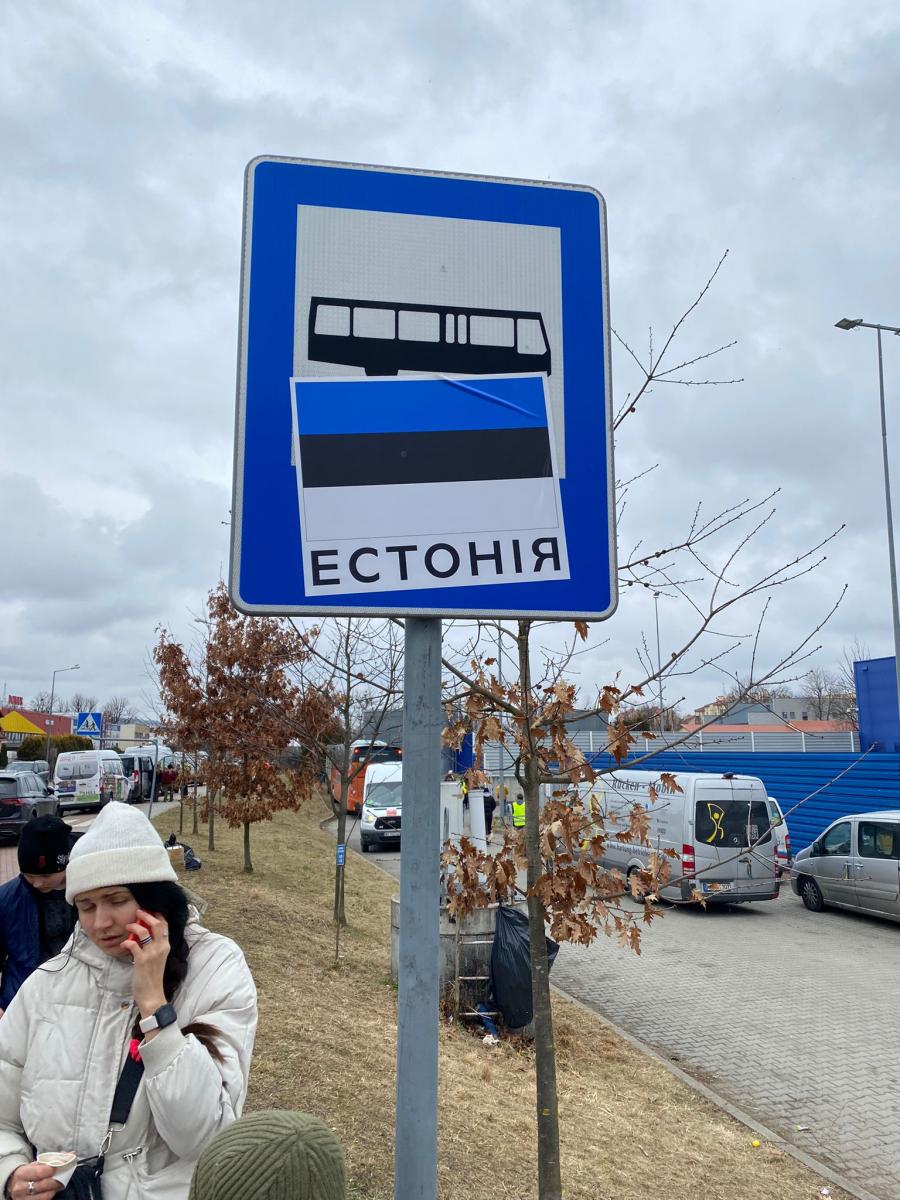 How did we get started?

The decision to send the first evacuation bus to Poland was made by the team in minutes in the late afternoon of February 25. Send? Send.

Every minute counts in a crisis and it takes 15-20 hours to drive to the Ukrainian border. Action must be taken immediately to ensure that help is waiting in the right place as soon as those in need arrive.

It's Friday afternoon. We’re racing against time. Information is received about the first refugees crossing the Medyka border crossing point. And second refugees who are on their way to Lublin. And third... They're broken and exhausted. They have families waiting in Estonia.

Tiit Pruuli and GoBus come on board, ready to operatively send buses to where they are needed. But what could a war refugee need when they get on a bus and have gone through exactly unknown events to get there? Who carries an unknown amount of things (or nothing)? Who has been on the road for an unknown time?

The first bus drivers who were ready to travel to Poland without a precise plan and with only a few hours' notice. Glory to you!

Quick call to the Food Bank. That evening we are directed to the Tallinn Methodist Church, who’s still organizing the evening distribution of food. Having received limited orders that "the food should be storable and easy to eat immediately on the bus", the (fantastic) people there pack the food supply on the first bus.

It is impossible to move on from the border without your own transport. The importance of evacuation buses is becoming increasingly clear.

What else? With the help of the Ukrainian Cultural Center, we look for the first coordinator who will go on the bus and help map the situation on the spot. Support those in need on the bus on the way back to Estonia. Coordinations, calls in Estonia, calls to Poland, briefings, calls, organizations, calls and only two hours later - late Friday night, the first bus starts its drive to Poland. The next one goes out early in the morning at 5 am – its base food supply is brought by one very big-hearted person on their own initiative.

And a quickly reacting coordinator, who at the time can be given no other instructions than to be ready for anything, bring your own food, a pillow... stay tuned, we’ll share information operationally.

As a result of the intermediate exchange of information with both Polish organizations and Estonian diplomats at the border, we direct the buses accordingly to Lublin and Medyka. We are in constant contact with the coordinators by phone. Things are unclear on the spot. News come in that refugees aren’t let across the border - at least not very quickly.

The buses find parking spots. Coordinators make and effort to get in touch with the refugees who have put themselves up and who we have quickly listed in the Excel spreadsheet: name, number, where they are. Need transport to Estonia. We get in contact with Andrew Paterson, who has gone to Medyka to meet his acquaintances. At the time we don't know this yet, but Andy becomes the backbone of creating our Medyka base.

There’s a lot of confusion. The first buses drive, refugees on board, back towards Estonia.

Coordinators map those on board. A hot meal stop is made. Everyone is taken care of.

Based on a previous agreement, we forward operational information to the Police and Border Guard Board (PBGB) and to the Estonian National Social Insurance Board (ENSIB) so that Estonia would be ready for the reception of refugees and action would be coordinated.

We direct the buses to Tallinn, organize medical care based on the information received from the bus. Refugees go sleep at the Tallinn hotel, exhausted bus drivers and coordinators home.

"When can I go again?" comes a call from a coordinator the next day. Gratitude. 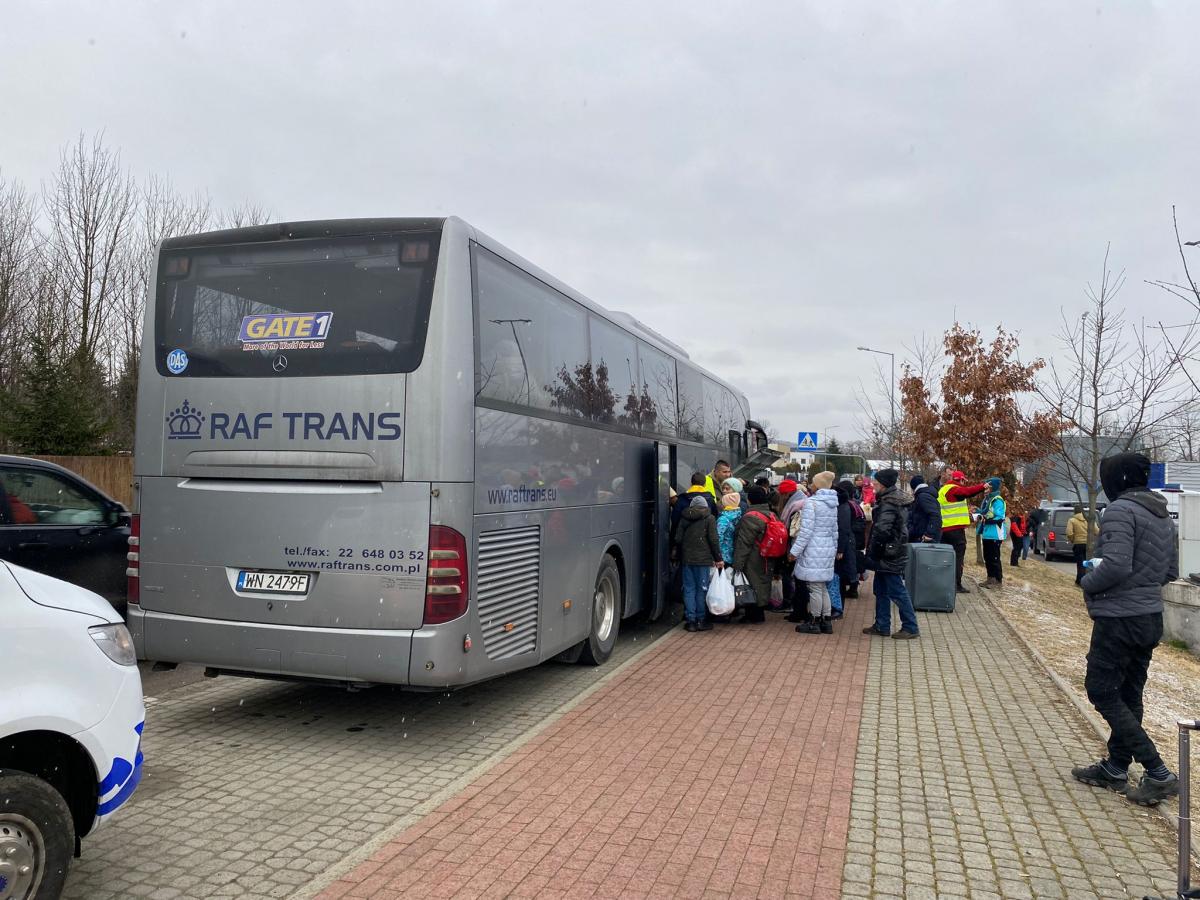 From refugees and their families. From those who are still stuck inside Ukraine. In panic and broken. Calls from support providers. From those who want to go from Estonia to Ukraine. From cooperation partners. From volunteers. From coordinators and bus drivers.

We send the next buses. Andy creates a base at Medyka. Is he sleeping? Doesn't seem so. Are we sleeping? A few hours a day. Volunteers go to Medyka to help. Other bus companies also come on board. We recruit coordinators.

What day is it? According to the latest data, Monday, but it may have also been the day before yesterday. It’s difficult to eat, makes you nauseous.

We collect donations, the whole evacuation can take place only thanks to donations.

Crisis meetings on top of coordination meetings. We look for professional logisticians to join our team. Wise employees are developing a special platform which would help quickly register people on buses and pass information to the PBGB on an ongoing basis.

We create a base for filling evacuation buses at Tallinn University. Students quickly take the reins, sorting and assembling products donated by companies and individuals. 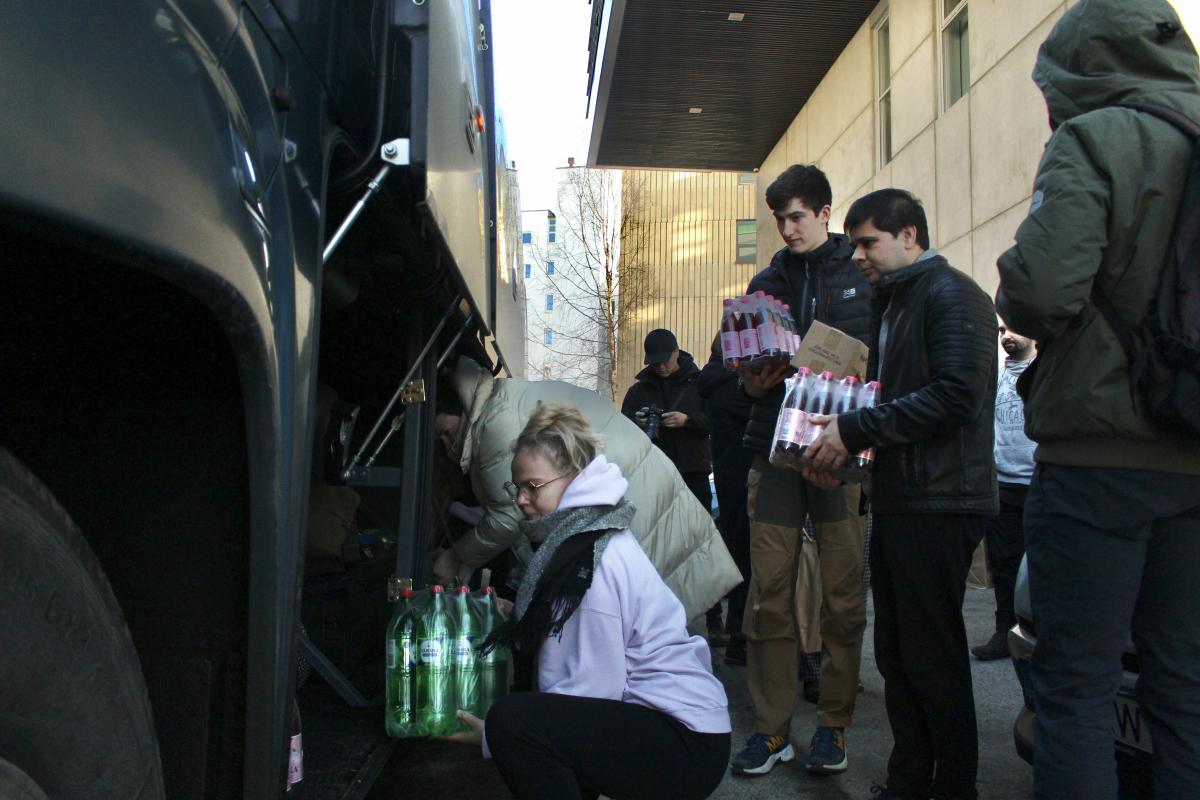 Wolt supports the team with credit - a life-saving step.

The base is filled with moods. There are tears and sleeplessness. There are quick pats on the shoulders - to encourage one another. Formalities and introductions have been forgotten. The team is working in full problem-solving swing. No one is questioning why we are doing all this.

Developments? Buses are now leaving, with hygiene products, medications, blankets and toys for children in addition to food as base equipment. Before leaving, bus coordinators already receive quick training to prepare themselves mentally and to support the refugees in a fragile condition in the best possible way already on the bus. When returning the opportunity for psychological screening.

What's happening at the Medyka base? The nearest accommodations are fully booked or too far from the border, first volunteers sleep in buses-cars. They register people on evacuation buses, share information, receive thousands of calls, answer questions, buy food, help in various situations. Volunteer drivers from border base bring people to large buses by minibuses and cars.

In Tallinn, we print posters with information about Estonia that can be used at the border. We send camper vans to the border base so that volunteers working at the limit of human capabilities can rest a little. And thermal blankets, medications, calling cards, power banks, markers... Everything. The base is unbelievably amazing, but extremely burdened.

Information is received about possible human traffickers and other risks.

We need to make the decision that we’ll no longer coordinate the journeys of private individuals. We focus entirely on large evacuation buses. We modify team structures according to the changing needs.

Receiving hundreds of evacuation related calls is clearly overwhelming for just a few people. Add to that the hundreds of e-mails, which are also operatively waiting for a response. Our team is joined by more and more Russian- and Ukrainian-speaking volunteers. We create a hot line with several phones. During peak times it’s also full and overloaded. We do our best. 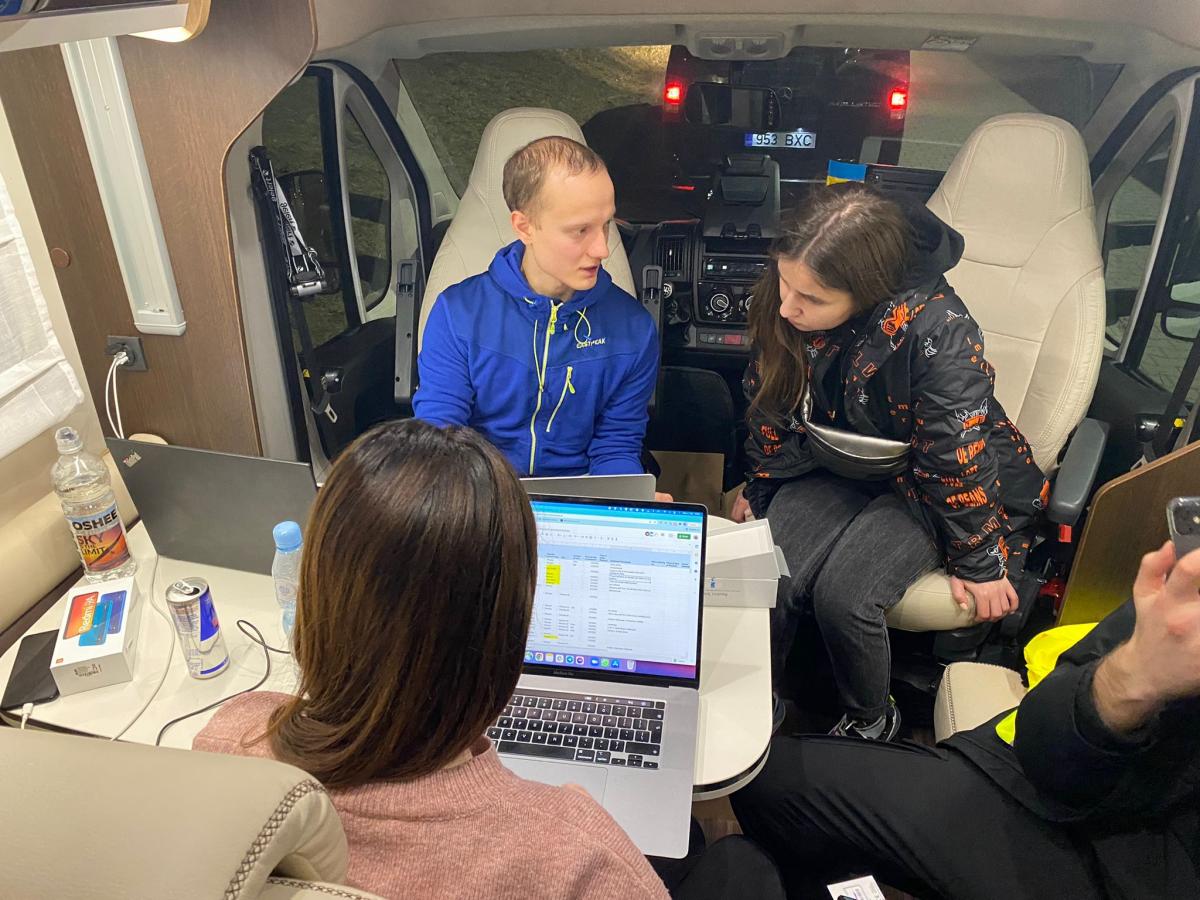 Work on a camper van in Medyka. Photo: Andrew Paterson

There is intensive communication between the base of Medyka and our headquarters in Tallinn. As always in a crisis, unexpected situations occur - whether a camper van breaks down on the road, whether necessary phones do not arrive fast enough.

Situation changes in hours, more and more refugees are arriving at the border. For a moment we speedily organize help from Polish bus companies to fill the gaps. The Estonian Embassy in Poland supports. 12-13 buses a day depart during peak times. The specific foods and medications that are most needed on buses become clearer. We specify our lists.

People who have arrived in Estonia safely by bus write to us. It reminds us why we do all this. We continue.

Work at the base is in full swing. The coordinators and volunteers who went to Medyka drop by the headquarters in Tallinn when they return. Talk about how on the bus there’s being emotional and completely unemotional. How many refugees have on the bus slept all the way and are still so exhausted when they arrive in Estonia that they have difficulty even talking. How children on the bus cuddle their toys.

They share experiences, talk about more specific needs, help with strength and advice. We learn on an ongoing basis from mistakes, improve systems. 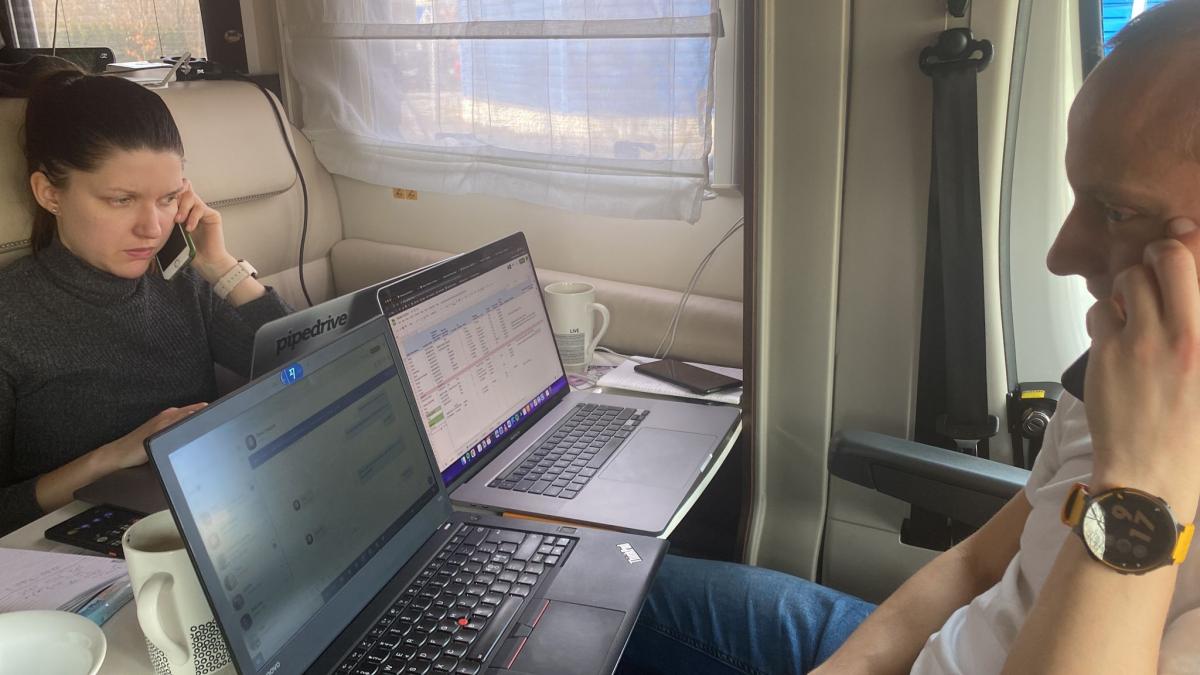 More and more people are looking into the possibility of getting on a bus from Slovakia as well. We decide to send one of the buses there to map the situation. We get refugees on the bus, but the need is much greater in Poland, we’ll stick to it. The state helpline 1247 starts helping our call center. The Defence Forces and Naiskodukaitse start helping with finding bus coordinators. Good cooperation continues with the PBGB.

Poland creates a large EXPO reception center. On the weekend, March 19, which is far from a day off for the team, we close our Medyka base. Poland has organized the transport of refugees from the border directly to Warsaw. For some time already we have been operating buses from both places, now only the Polish capital remains. Among other things, our volunteers at the Warsaw base help the local police arrest human traffickers.

The great need for evacuation, which began on February 25 and which transport gap we had filled for more than a month, has almost disappeared. We map out the possibilities to reach Estonia from Warsaw by regular lines (Ecolines, LuxExpress, Flixbus). Their systems work and the connection is frequent.

We make the decision to end the operation of regular evacuation buses, to direct aid to those who have arrived in Estonia and into Ukraine. But we keep our finger on the pulse and maintain our capability. To go again, if necessary, now with even an hour's notice. Good cooperation partners are with us.

We’re here and ready to act.