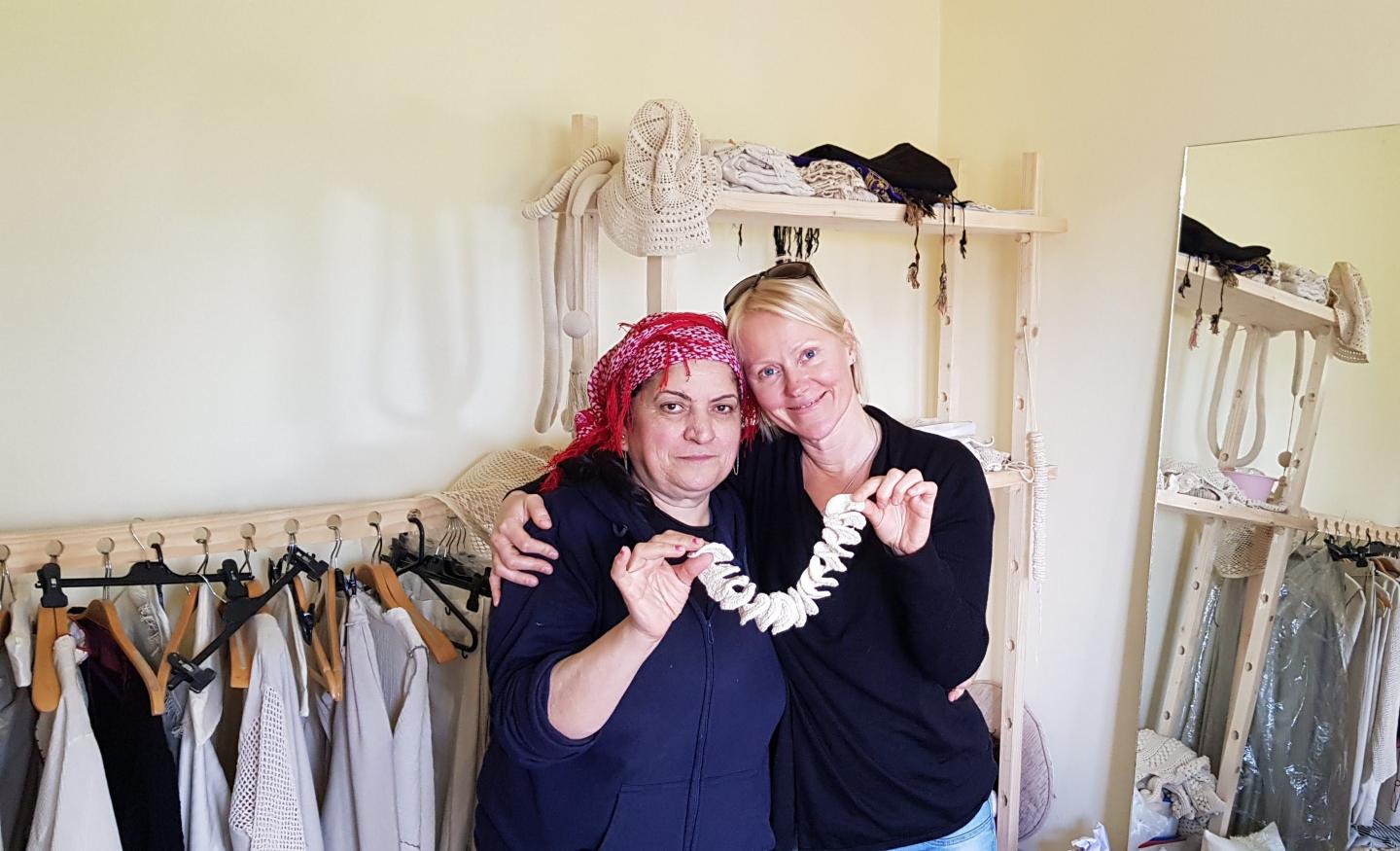 The Estonian Refugee Council has a clothing design and production company roughly 4500 kilometers away from Tallinn. Located in the Beqaa Valley, Lebanon, it supports Syrian refugees under the trademark The Master Peace. We created this social enterprise in collaboration with a local organization called SAWA for Development and Aid. The Estonian Ministry of Foreign Affairs finances the project.

I was on another monitoring trip, meeting people to whom our newly-opened creative center offered jobs. My first meeting with Oum Fawzi was very memorable. She exuded inner strength and warmth, so spending time with her felt very natural and comfortable from the beginning. Oum Fawzi spoke about her earlier life in Syria, told me what happened when the war started and how she adapted to the new life being a refugee in Lebanon. 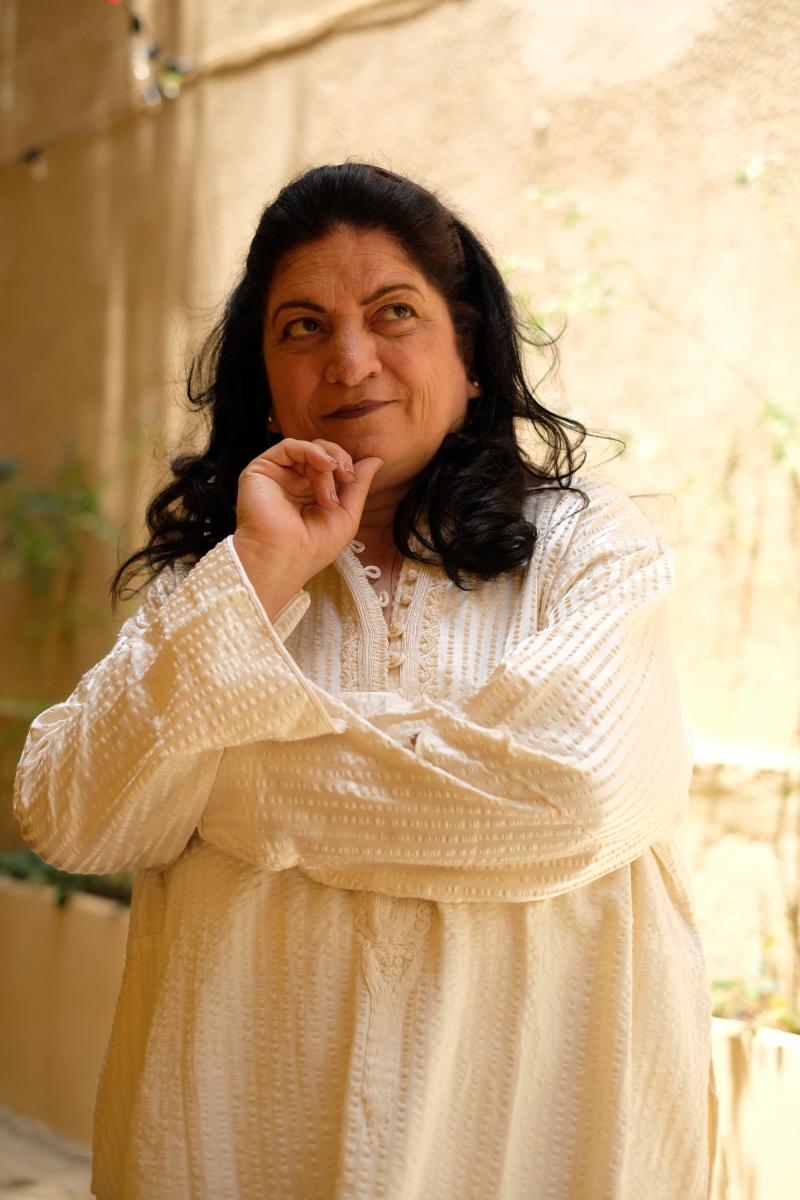 Oum Fawzi is from Homs, Syria. In her homeland, her job was to design clothes, sew, and teach others the same. Being a tailor has been a long tradition in her family. Yet, she says, she got her talent and will to work in the same field from birth. She has taken part in an art exhibition; her deceased daughter was also an artist.

Oum Fawzi's four-member family had to leave Homs in 2012 when the situation became so dangerous that staying home was no longer possible. [i] They decided to go to Lebanon because of its closeness to Homs. They settled in Zahlé, the capital of the Beqaa Governorate. The family has remained hopeful for the possibility to one day go back home. As for now, that time hasn't arrived.

When houses needed to be obscured during the siege of Homs, her and 4-5 more families gathered to shelter from the bombs. To comfort the children and alleviate their sadness and fear, Oum Fawzi asked them in turns, which color of cloth she should sew into the unfinished quilt. The quilt, made in the candlelight and accompanied by rumbling bomb explosions, traveled to Lebanon with the family. "I put a piece of cloth in every color the children chose into the blanket. When we left Homs we couldn't take many things with us. I don't know how that quilt ended up in our bags. Now it's my talisman," said Oum Fawzi. "I teach the Master Peace group the same technique that helped the kids to survive those awful times at home, among other things," she added. 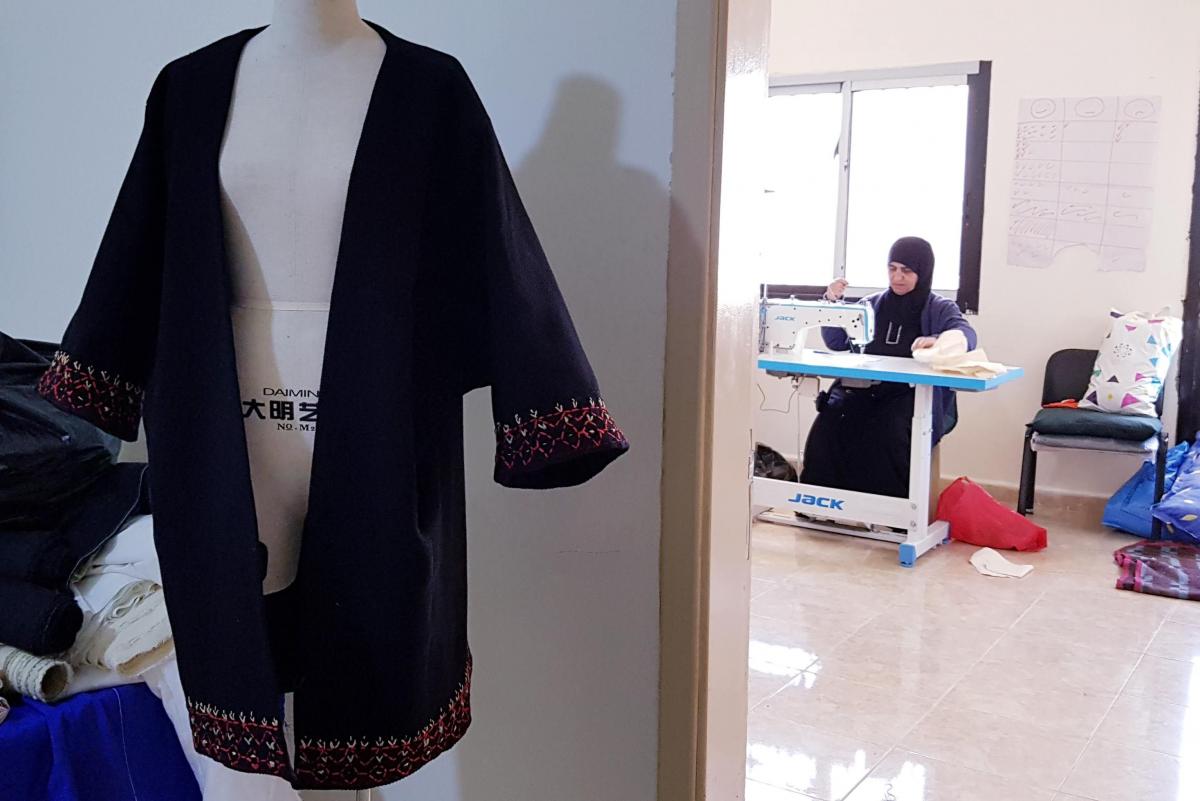 The first few years in Lebanon were very rough for the family. There are a lot of refugees and a massive lack of jobs among them. Oum Fawzi's sons, who together ran a transport and moving company in Syria, couldn't get a job for three years straight - driving to work alone ended up costing more than the money Syrians would get as a salary. Oum Fawzi's family got shelter from a Lebanese elder, whom Oum Fawzi started taking care of. The man was moody, didn't pay wages, and eventually kicked them out altogether. It was a tough situation even though relatives that had gotten shelter elsewhere tried to support them. By chance, Oum Fawzi started talking to a Syrian woman who got help from the UN, and she asked her if she wants to sew clothes for her children. Every time a piece of clothing got finished, the woman would cook for Oum Fawzi's family. "Chances like that helped me to survive. I cried a lot at that time, "she reminisced, "I would sit outside and cry. People started to call me the Weeping Woman. "

Joining the sewing group established by the social enterprise (started in collaboration with the Estonian Refugee Council and SAWA for Development and Aid) changed a lot in Oum Fawzi's life. She heard about The Master Peace by chance two years ago when she fixed some Syrian students' clothes. Someone told her about the starting project, and the pro-active woman decided to show up at the interview. 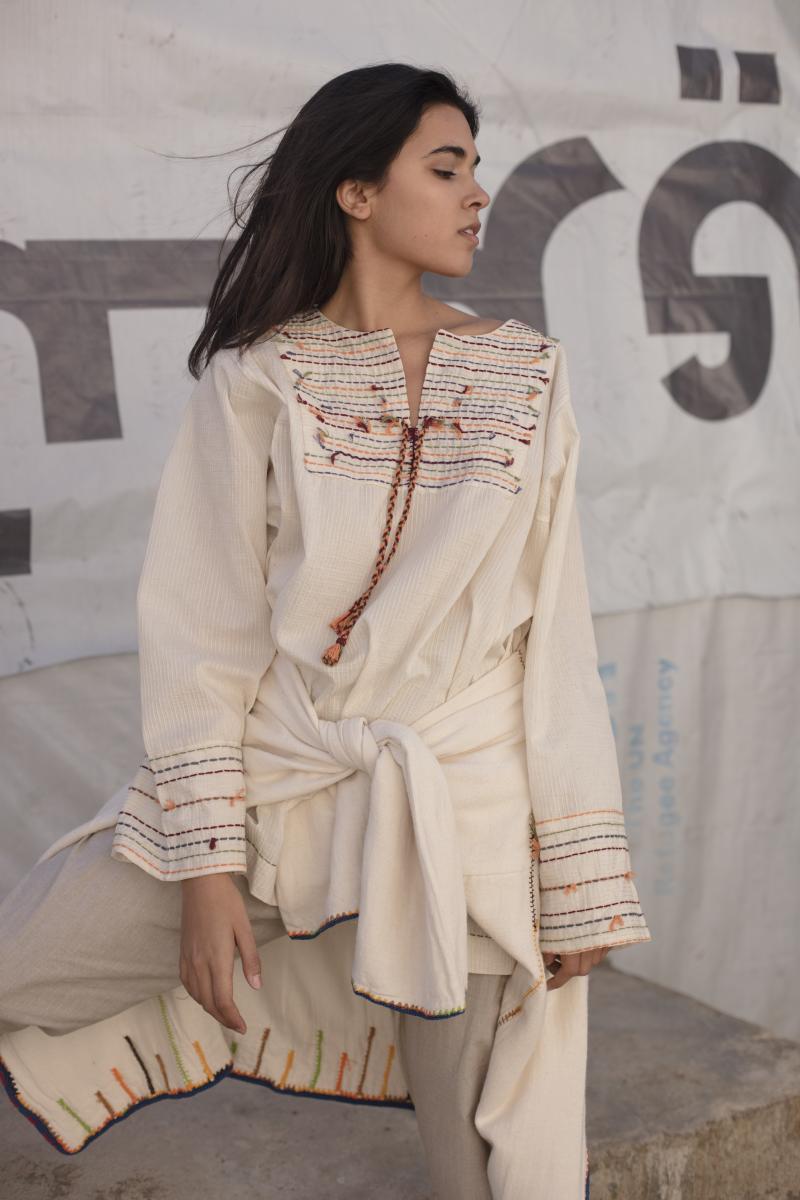 Oum Fawzi was chosen to lead the sewing group thanks to her leadership qualities and sewing and designing skills. Tens of refugee women started to train under her mentorship. The few-hundred dollar wages and bonuses from sales turned out to be irreplaceable for survival.

"Everything changed. The wages from The Master Peace have critical importance for my family, but the psychological support from the SAWA members had a healing effect on me. Every time I teach someone from the group or I share my skills I feel so much better, "says Oum Fawzi. 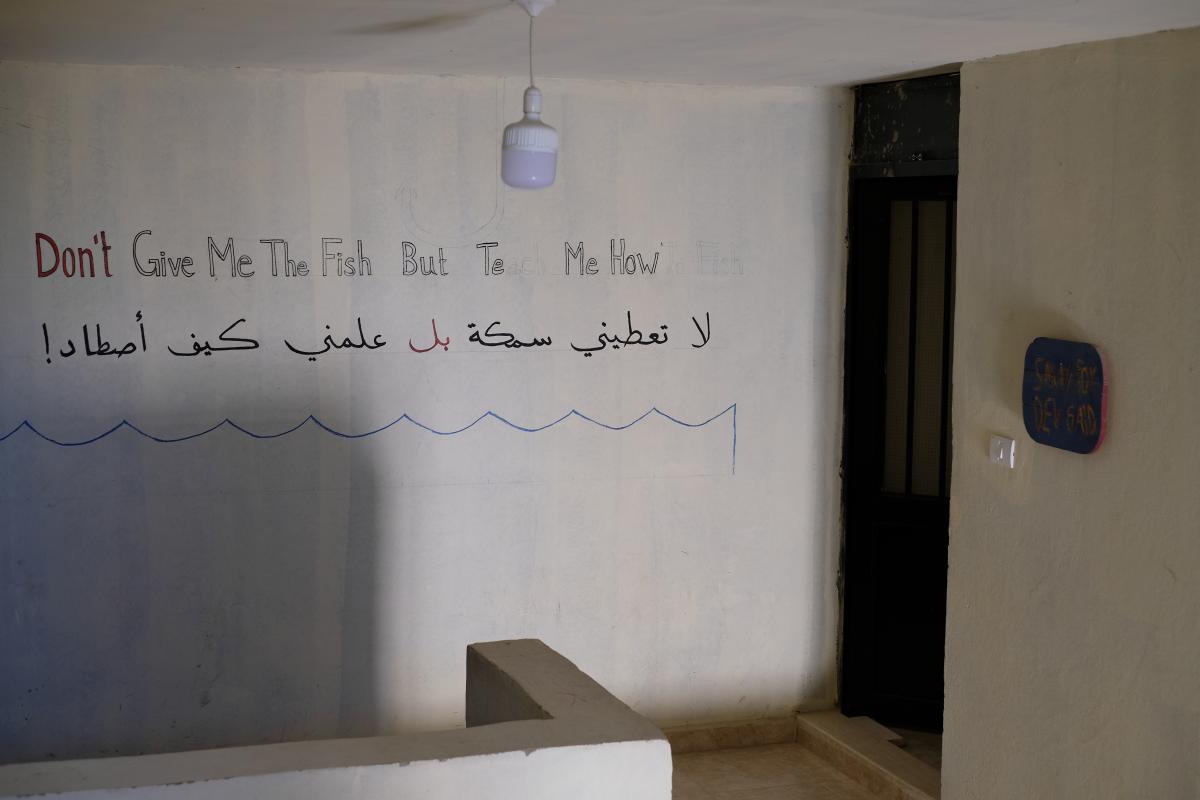 There is a common saying in Estonia that you should give a person in need a fishing rod, not a fish. It is also common in Syria and Lebanon. ERC is giving the Syrians a rod.

"The Master Peace is everything to me. It gave me back my life, allowed me to apply my skills, and the opportunity to share everything I have with others. Through hard work, we have also reached the world[ii]. The Master Peace is a source of light for every woman who is part of the process, giving them a chance to release the pain and anger and create something new and beautiful out of what is hidden in them. The opportunity to modernize traditional Syrian techniques has been a great privilege for us," says Oum Fawzi, who by now has been with the Estonian Refugee Council project for over two years. "We started this project with thirty women, each of us from a different Syrian village or area. We work as a unified team. It is our way of showing the world what strong Syrian women are capable of making during difficult times! ".

When I asked Oum Fawzi if she still cries in front of the house, a big smile appeared on her face. "I am so thankful for all of you for this project! Sometimes I feel like I'm back to the same life rhythm as in Syria. I often remind the women in our group that there are still people in the world who are ready to do good for others. Right now, I am happy! "says this strong, raspy-voiced woman from Syria. I am convinced that she is one of the most inspirational women I have ever met.

[i] The Syrian regime sieged Homs, controlled by opposition groups, for three consecutive years since May 2011. Electricity and gas supplies were cut off, connections to electricity and gas got cut as well. The bombing of neighborhoods accompanied hunger, water crises, and intensified military clashes.

[ii]  The Master Peace clothing has been sold to different countries from America to the United Arab Emirates.